“Spelling, 5/2.” Write the correct pair. NOT THE LETTER; THE WORDS! NOT COLLABORATIVE!

Tom Sawyer. (8p) You may write the CAPITAL letter. 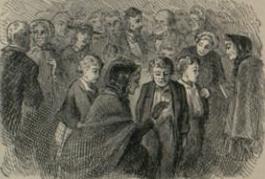 “Vocabulary, 4/30.”  Once each including diverge/converge. The last one is a SAW.

Chapter 17: Pirates at their own funeral!